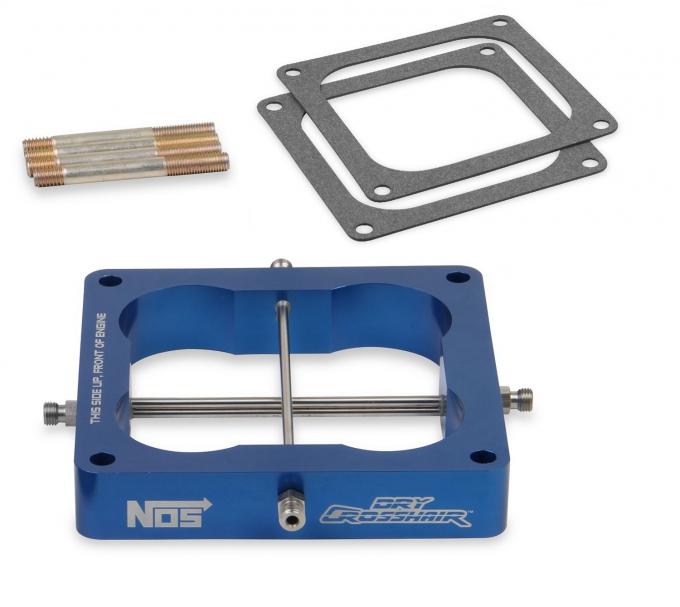 CALL US
877.589.9860
Description Downloads Video Specifications Reviews (0) Product Q&A
NOS's new CrossHair(TM) plate systems have been designed with the serious racer in mind and are capable of 350 plus HP. Based off of the ever popular double cross plate systems, the CrossHair(TM) takes this time tested design and improved it for better distribution of the fuel and nitrous. This is especially important with the complex intake manifold designs out today. The CrossHair(TM) plate systems feature double down nitrous bars for improved distribution and atomization, along with new track tested tune up's. The new CrossHair(TM) nitrous plates will give you the power you need, when you need it. CrossHair(TM) kits come with a blue anodized CrossHair(TM) plate in Holley 4150(TM) bolt patterns, jetting, plumbing and hardware. Available separately, NOS offers electrical wiring kits and bottle kits in a variety of combinations so you can make up your own custom kit combination.
Features:
Holley Performance Emission Code 4: This part is legal for sale or use on Racing Use Only Vehicles. The following vehicles are considered Racing Use Only Vehicles: Racing Use Only Vehicles are vehicles that are used exclusively for competition that are not registered and that may never be used on the street. WARNING: It is against the law to install this part on an Emissions Controlled Vehicle
Installation Notes:
This kit is a "Dry" kit, meaning no additional fuel is added through the Nitrous System, as in a traditional nitrous/fuel system. This kit requires an EFI system that has the ability to add fuel when the system is activated.