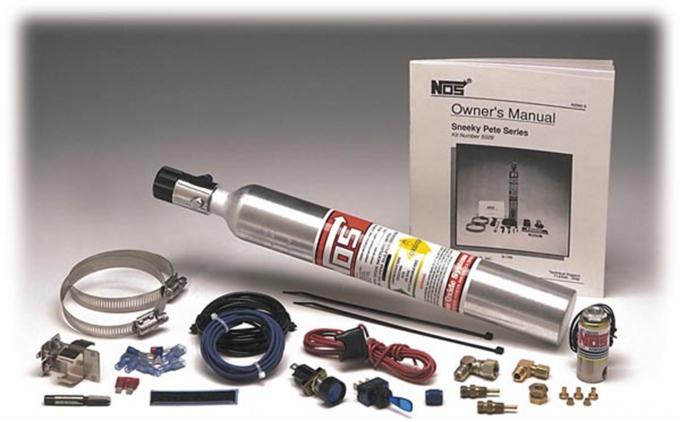 CALL US
877.589.9860
Description Downloads Specifications Reviews (0) Product Q&A
The Sneeky Pete was designed as a true cheater kit. This kit will enable you to obtain that extra tenth of a second without being obvious. It will be necessary to jet the carburetors a little richer, over and above what is normal, since you will have to compensate for the nitrous from the Sneeky Pete, while being sneeky since no additional fuel source is utilized. The kit comes complete with a compact, easy to conceal 10 ounce bottle, nitrous solenoid, nylon nitrous line, wiring, 9 volt battery holder and an assortment of jets.
Features:
Holley Performance Emission Code 4: This part is legal for sale or use on Racing Use Only Vehicles. The following vehicles are considered Racing Use Only Vehicles: Racing Use Only Vehicles are vehicles that are used exclusively for competition that are not registered and that may never be used on the street. WARNING: It is against the law to install this part on an Emissions Controlled Vehicle
Installation Notes:
This kit is designed for CARBURETED applications only. Any other use could result in engine failure.