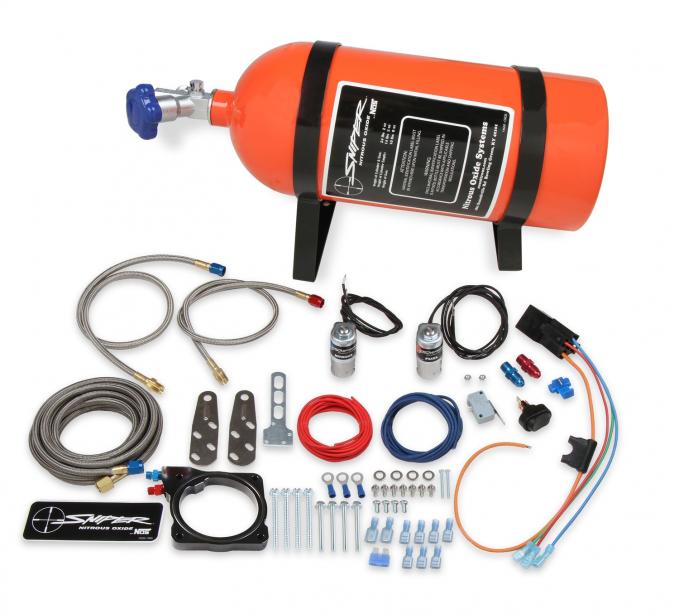 CALL US
877.589.9860
Description Downloads Specifications Reviews (0) Product Q&A
NOS has built on the very popular, budget friendly, Sniper nitrous kits for those who need a little more power from their engines. The new Sniper 250 kits step up the power potential to an additional 250 horsepower, in a low cost single nitrous plate kit, for the popular carburetors, Holley 4150 (Square Flange), 4500 (Dominator) & Spread Bore (Quadra jet). These single stage, wet kits have everything needed to add some extra power to your engine. The kit includes a 10 lb. Sniper orange nitrous bottle, 14 ft. -4AN feed line, stainless bar nitrous plate and the new large body Sniper Solenoids. Also included is all the hardware required as well as nitrous and fuel jetting for power levels of 150, 175, 200 & 250 horsepower, additional jets are available. For a budget friendly, big power nitrous kit, look no further than the Nitrous Oxide Systems Sniper 250 kits. Note: it is important to follow the installation instructions and to insure the fuel system has the capacity to supply the total power of the engine plus the added power of the nitrous system.
Features:
Holley Performance Emission Code 4: This part is legal for sale or use on Racing Use Only Vehicles. The following vehicles are considered Racing Use Only Vehicles: Racing Use Only Vehicles are vehicles that are used exclusively for competition that are not registered and that may never be used on the street. WARNING: It is against the law to install this part on an Emissions Controlled Vehicle
Installation Notes:
Recommend 1 - 2 steps colder spark plugs. No projected tip, fine wire or iridium spark plugs. Power levels in excess of 75 hp should use a racing/high octane rated fuel.