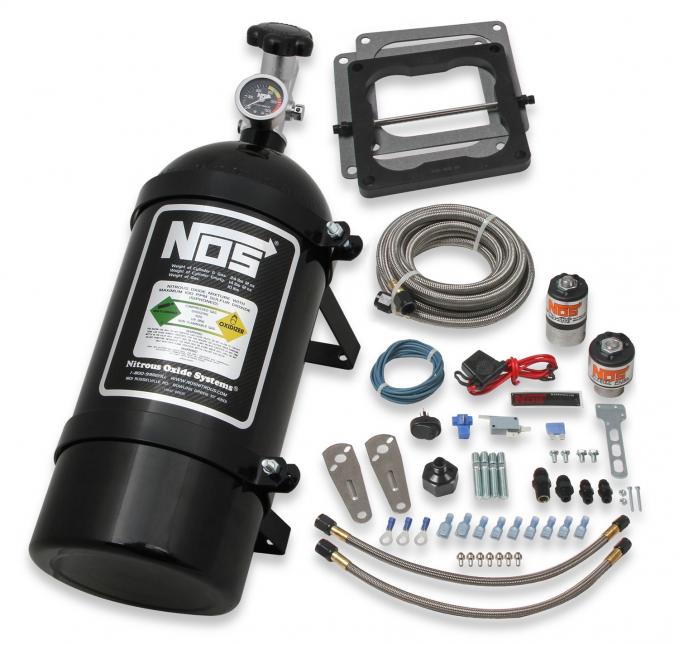 CALL US
877.589.9860
Description Downloads Video Specifications Reviews (0) Product Q&A
NOS is proud to now offer its popular Big Shot wet nitrous systems in black. These systems are adjustable from 190-300 horsepower and use a special fogging plate design that vastly improves nitrous flow, fuel atomization and mixture distribution. Our Big Shot plate utilizes a unique spray bar that is equipped with tiny orifices that are precisely located to efficiently dispense a powerful nitrous/gasoline mixture for unbelievable horsepower gains. Power output is adjustable from 190-300 horsepower simply by changing fuel and nitrous jets. This single stage system includes everything needed including 6AN feed line, ½ inch fogging aluminum plate, black 10 lb bottle, solenoids, hardware, and instructions to complete the installation.
Features:
Holley Performance Emission Code 4: This part is legal for sale or use on Racing Use Only Vehicles. The following vehicles are considered Racing Use Only Vehicles: Racing Use Only Vehicles are vehicles that are used exclusively for competition that are not registered and that may never be used on the street. WARNING: It is against the law to install this part on an Emissions Controlled Vehicle
Installation Notes:
Big Shot systems are designed for use on engines that have been extensively modified and intended primarily for competition applications. To supply the proper amount of fuel to the carburetor and Big Shot system, a fuel pump must be used that is designed to operate between 5 and 10 psi, with a flow rate of at least 0.1 gallons per horsepower per hour at 6 psi. High cylinder pressures are generated with the use of these kits, and this greatly increases the load on internal engine components.