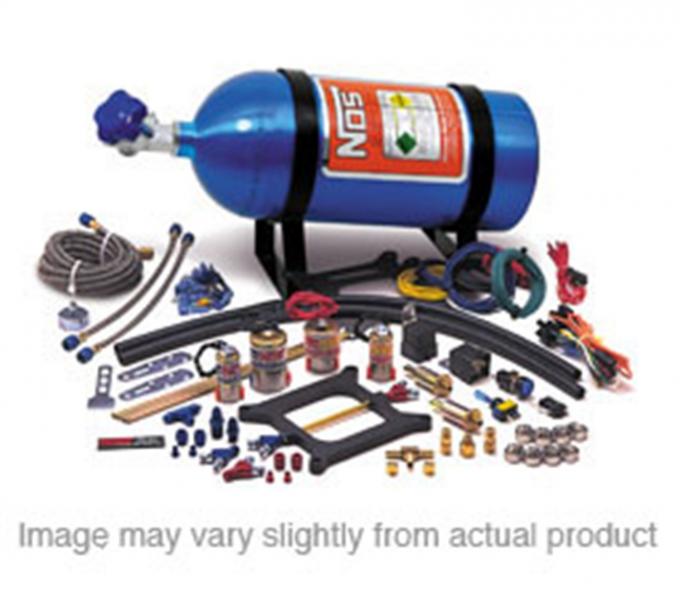 CALL US
877.589.9860
Description Downloads Video Specifications Reviews (0) Product Q&A
Sometimes the application of too much power can be detrimental to a good launch. This is especially so when the vehicle chassis or prevailing track conditions contribute to a loss of traction. These are times when you need the help of a NOS(R) Dual Shot Cheater(TM) system to maximize performance from the starting line, all the way through the lights. It's like having two systems in one. The first stage is activated by a throttle switch on the carburetor and includes Jets to add anywhere from 100–150 extra horsepower. Then, when the tires are fully hooked up, the driver can activate the second stage with a push of a button, or add a delay timer 15838NOS for the ultimate in consistency. The second stage immediately takes over and provides an extra 150 to 250 horsepower. Changing conditions can easily be accommodated simply by changing the nitrous jets, which takes just seconds to accomplish. The Dual Shot Cheater(TM) system incorporates two Super Powershot(TM) solenoids for the first stage and two Cheater(TM) solenoids for the second stage. The system includes a variety of power Jets that can be used to reduce nitrous power output to as low as 50 horsepower. Other components included with the systems are a 10 pound nitrous bottle, 1/2 inch injector plate, aircraft quality steel braided hose, and all necessary electrical and mounting hardware for a complete installation. This system is intended for use on V8 engines with a minimum displacement of 350 CID. For best results, a single plane intake manifold should be used.
Features:
Holley Performance Emission Code 4: This part is legal for sale or use on Racing Use Only Vehicles. The following vehicles are considered Racing Use Only Vehicles: Racing Use Only Vehicles are vehicles that are used exclusively for competition that are not registered and that may never be used on the street. WARNING: It is against the law to install this part on an Emissions Controlled Vehicle
Installation Notes:
If this “staged” application of nitrous is still too severe then it’s time for an NOS Progressive Nitrous Controller. Several models are available, the most sophisticated of which controls both the amount of nitrous being injected and the ramp-up time; it can also be used to activate the second nitrous stage.