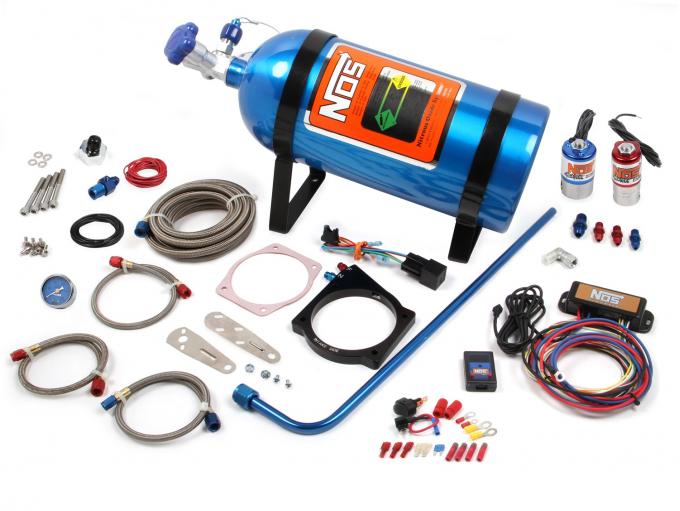 CALL US
877.589.9860
Description Vehicle Fitment Downloads Specifications Reviews (0) Product Q&A
If you are running one of the many LS based engines and would like to add up to 250 additional horsepower, NOS has a complete nitrous kit option for you. These kits are ideal for adding a little more power to that stock engine or a lot more power to that custom built Hot Rod. Available for 4-bolt, drive-by-wire or cable operated throttle bodies in 90mm & 105mm plate sizes. These are "Wet" plates, meaning the additional fuel is added though the nitrous system, so there are no requirements for an injector upgrade, however it is important to ensure the existing fuel delivery system is adequate to support the expected power levels.
Features:
Holley Performance Emission Code 4: This part is legal for sale or use on Racing Use Only Vehicles. The following vehicles are considered Racing Use Only Vehicles: Racing Use Only Vehicles are vehicles that are used exclusively for competition that are not registered and that may never be used on the street. WARNING: It is against the law to install this part on an Emissions Controlled Vehicle
Installation Notes:
Retains stock throttle body location and orientation using a 1/2" billet aluminum plate. Power levels up to 250 RWHP do not require injector upgrade, however, the total fuel supply system must be sized according to expected power levels. Recommend 1 step colder spark plug up to 150 RWHP, 2 steps colder spark plug on 200 and up RW